Apple's Vision framework offers a lot of tools for image processing and image-based machine learning, one of those is detecting faces. This tutorial will show you how to detect faces using Vision, and display those faces on the screen. By the end of the tutorial you'll have an app that looks like this: 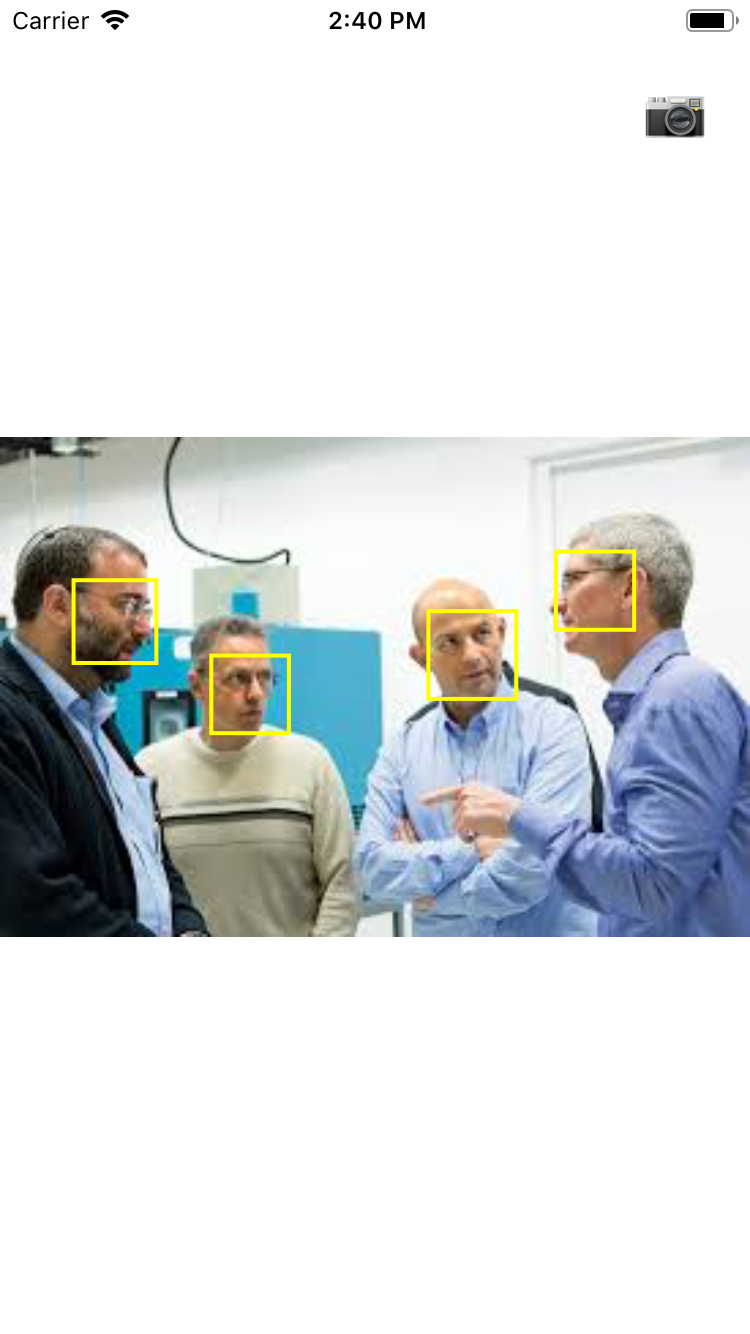 You can use facial detection to crop images, focus on important parts of an image, or for letting the users easily tag their friends in an image. You can find the full code of this tutorial on GitHub.

Setting up the UI

We'll start by making sure we can see and pick new photos to detect faces on. Create a new single-view app project in Xcode, and open up Main.storyboard.

Start by dragging an image view from the object library onto the storyboard. Once it's there, add four new constraints to it so that it's fixed to the leading, trailing, top and bottom edges of the safe area. This image view will show the image the faces are being detected on.

Next, drag a button to the storyboard, and add two new constraints:

This should fix the button to the top-right edge of the screen. You'll use this button to show an image picker, so give it a title like "Pick image". I used a camera emoji. By the end of this, your storyboard should look like this: 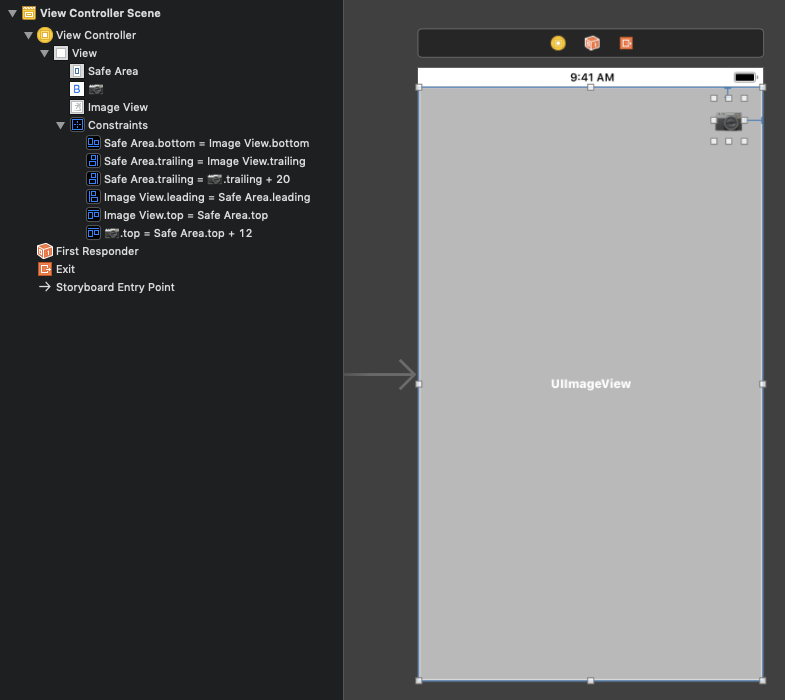 Next, open ViewController.swift and add an IBOutlet to the storyboard's image view called imageView.

Next, add a new IBAction from the button in the storyboard, and call it cameraButtonTapped.

Next, add the following method to the class:

This method will show a new image picker as a modal screen, configured with the source type that was passed to the method. At this point you'll get an error because you didn't implement UIImagePickerControllerDelegate yet, so let's do this next. Add the following extension to the bottom of the file:

This will fetch the picked image and show it on the view controller's image view. It will then dismiss the modal image picker.

We now have the code for the image picker in place, but we're not actually calling the methods anywhere. We'll do this from cameraButtonTapped, when the button gets tapped.

First we'll present an action sheet to let the user pick whether they want to take a new photo or pick an existing one from their library. Add the following code to cameraButtonTapped:

The user can pick from two options: either selecting an image from their library or taking a new image. Both of these options will call showImagePicker, but with a different parameter for the source type.

We'll add one more tweak: add the following line to the bottom of viewDidLoad:

This will make sure the image isn't stretched when it's displayed on the image view.

If you run the project now, you should be able to pick an image from your library and see it appear on the view controller. 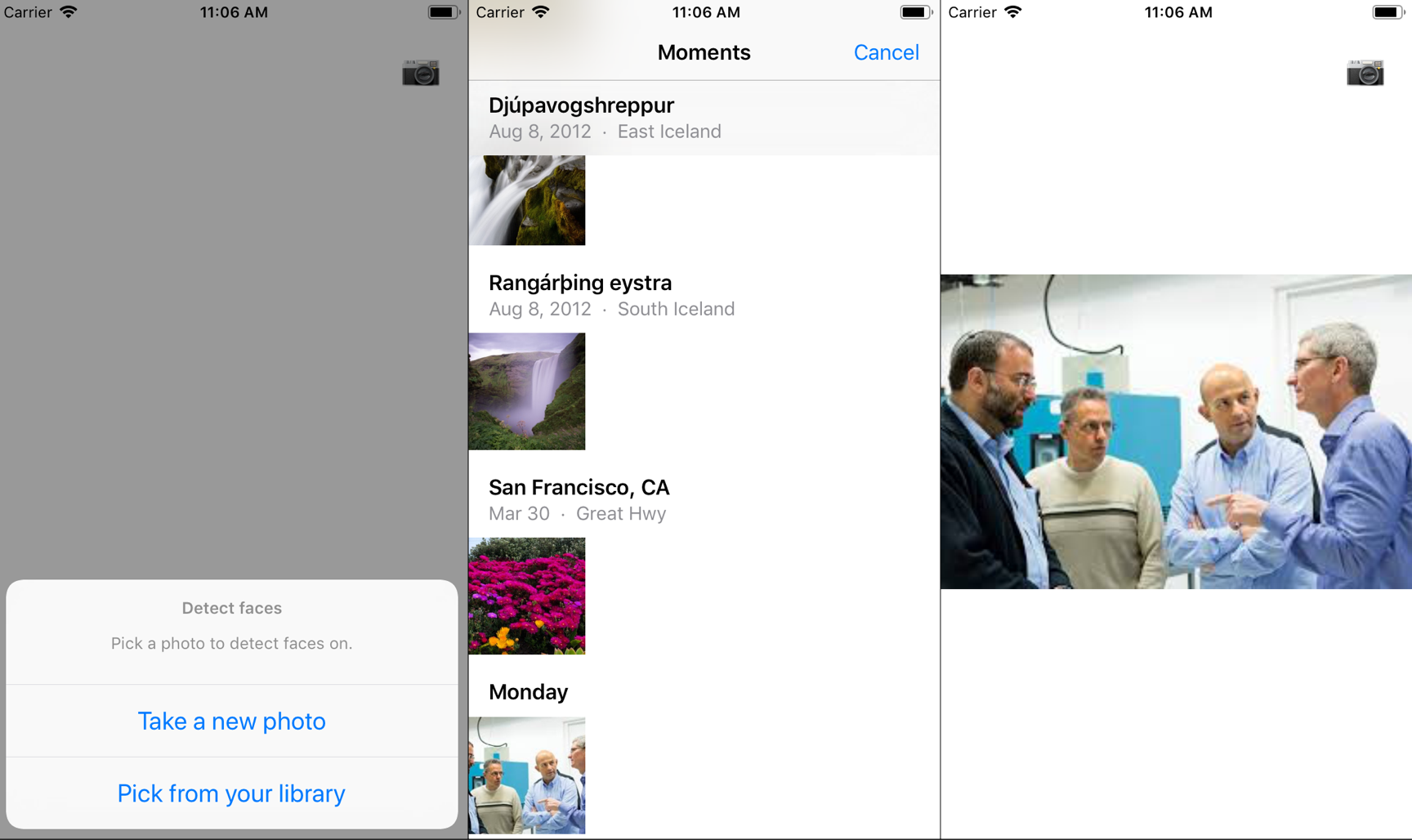 Now that we have our image, we can detect faces on it! To do this we'll use Vision: a built-in framework for image processing and using image-based machine learning.

Vision provides out-of-the-box APIs for detecting faces and facial features, rectangles, text and bar codes (including QR codes). Additionally, you can combine it with custom Core ML models for building things like custom object classifiers. For more information on the different machine learning frameworks in iOS, check out the introduction to machine learning on iOS.

Before we can start using Vision, we need to import it, so add the following import to the top of the file:

We'll start by adding a new method to the class called detectFaces:

The core of vision is the request handler. This handler performs different operations on a single image, which is why we are creating it with the image view's image. The different actions are called "requests", and a handler can perform multiple requests at once.

Since we need to detect faces, we can use the built-in VNDetectFaceRectanglesRequest, which lets us find the bounding boxes of faces on our image.

Add the following property to the class:

A single request can be performed on multiple images, which is why it's good practice to create one shared request object instead of creating it every time a function is called.

Note that there is also a VNDetectFaceLandmarksRequest. Alongside face bounding boxes, it detects facial features like noses, eyes, mouths and similar. Because of that, it's slower than VNDetectFaceRectanglesRequest, so we won't be using it.

Next, we'll implement the completion handler by adding the following method to the class:

For now we'll just print out the results to the console. The boundingBox property contains a normalized rectangle of where the face is. This means that its origin and scale are percentages of the image's width and height, and not absolute values. We'll see how to deal with that later on in the tutorial.

Next, we need to actually perform the request. We'll do this by adding the following code to the bottom of detectFaces:

We'll hop over to a background queue so we don't block the main thread while detection is going on. There, we'll try to use the handler to perform the request. If it fails, we'll simply print the error out.

Finally, we need to call the detectFaces method from imagePickerController, so add the following line to the extension, right above the call to dismiss:

If you run the project now and pick an image with a face on it, you should see the faces' bounding boxes printed to the console. 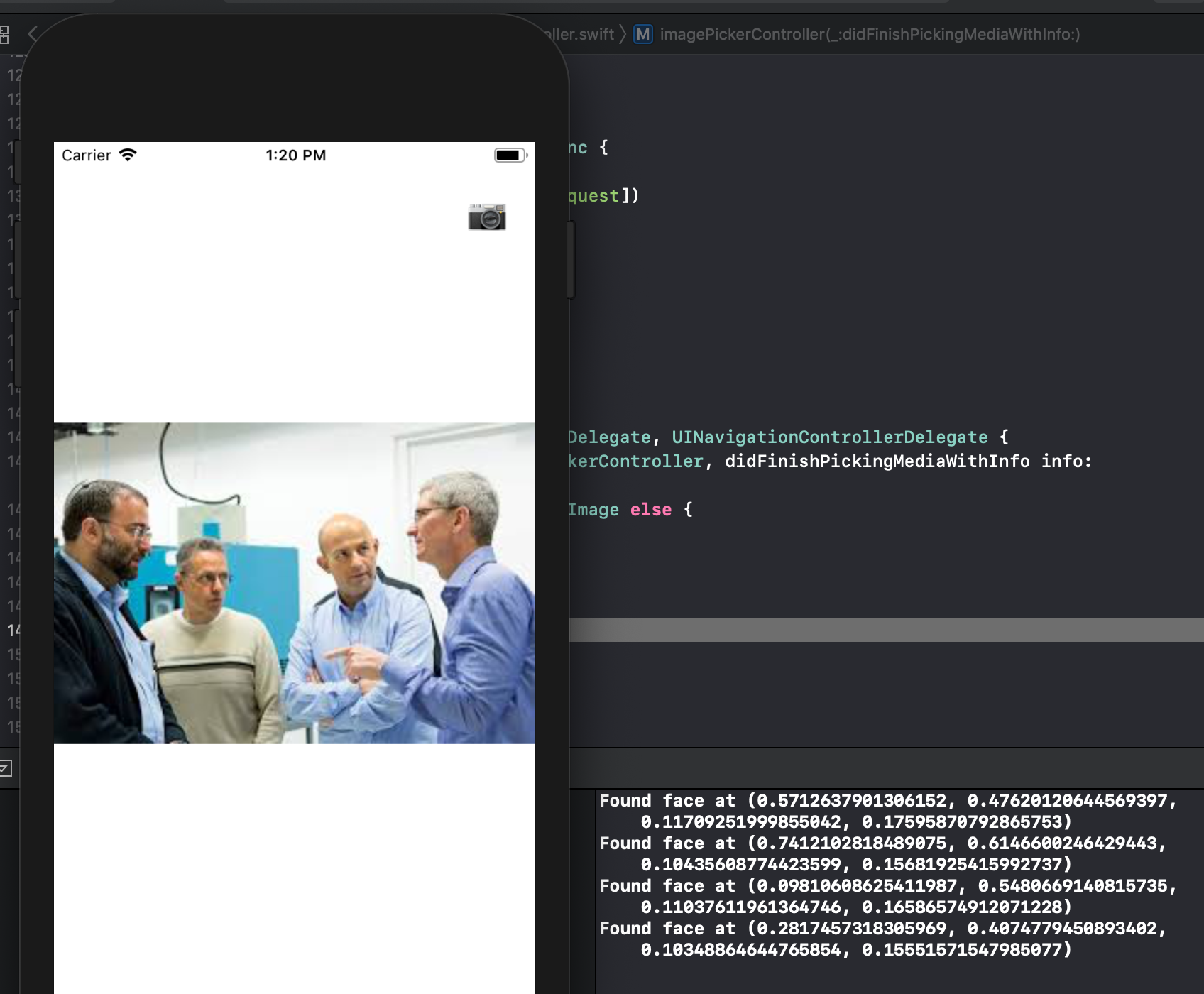 Now that we have the bounding boxes, it's time to draw them on the screen! We'll use Core Animation to create a CALayer for each face's bounding rectangle, and add them to the screen.

Start by adding the following property to the class:

This layer will hold all of the faces' rectangles. We'll add this layer to the image view by adding the following code to the bottom of viewDidLoad:

As mentioned before, Vision returns normalized rectangles in the image. This means we need a way to convert from those normalized values into actual coordinates in the image view. To do this, we first need to know where the image actually is within the view (because it gets scaled to fit inside the view). We can do by adding this handy extension by Paul Hudson to the top of the file:

Now that we have the image's bounds, we can use it to de-normalize our face bounding boxes. Add the following method to ViewController:

This is a lot of math, but don't panic!

Since the values in the normalized CGRect are percentages, we can get the actual values by multiplying them with the images width or height, respectively. We'll also add the images origin to the new rect's origin coordinates so it starts from the same point the image starts. The normalized rectangle has its origin in the lower-left corner, while Core Animation expects drawing to start from the top-left, which is why we're subtracting the origin's y value from 1. Whew!

Now that we have all the pieces in place, it's time to put them together and actually draw these rectangles on the screen. Add the following code to the bottom of onFacesDetected:

Since the callback can be called on an arbitrary thread, we need to move back to the main thread in order to update the UI. We'll perform all updates inside a CATransaction so that they happen in a single UI pass. For each bounding box, we'll draw a face. The final key to this puzzle is adding the drawFace method to the class:

This method creates a new layer and draws the denormalized rectangle with a yellow outline. It then adds this layer to the results layer.

If you run the project now, you should see a yellow rectangle around people's faces!

And that's it! You can find the full code of this tutorial on GitHub.

In this tutorial we'll be building a chat app using Go, JavaScript and Scaledrone realtime messaging platform. You can find the full source from GitHub. Structure of the project Our tutorial will be